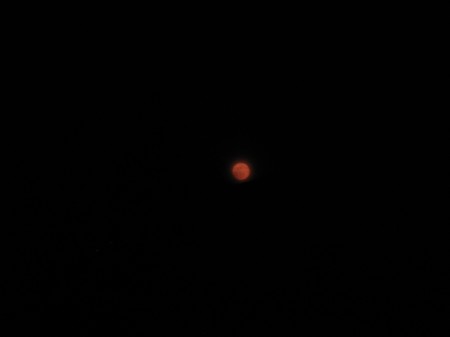 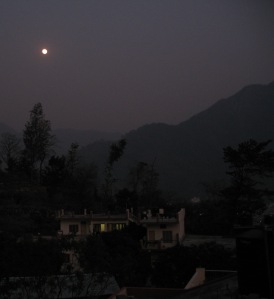 Haven’t written in a few days as I just haven’t felt like spending my precious time sitting at the computer. The evenings are so much longer, and it is so lovely just to sit outdoors until almost 8 and enjoy the blessings of the mild weather and Nature’s wonders. Just a few pictures of the moon as seen last night, and the orange globe of this evening. It was quite astounding…The night before it was brilliant white light blazing in the evening sky, and this evening, this amazing ball of orange fire rising over the horizon just as it got dark.

Yesterday I rested most of the day and quietly enjoyed the pleasant day, after spending the day before out getting most of my “coming home” shopping done…which was also quite pleasant…no hassle. While sitting outside yesterday afternoon, near dusk, the sky was filled with migrating birds. This has been going on all week, and no one here seems to know where they are migrating…they are going South always but I’ve never seen this before here in Rishikesh. And then through this crowd of migrating birds, an enormous eagle glided its way through the sky on the currents and circled around and around, over and over again, for over 15 minutes, never moving a wing. The other birds just moved around this enormous and regal bird…I was so entranced in watching it, that I never even thought to go in and get my camera, so you will have to believe me that it was quite spectacular. It came directly over the terrace several times and its wing spread was enormous…absolutely fabulous.

Just remembered…I also treated myself to a facial finally, but not at the usual place I had been going to in the past. Someplace closer by. She is using a technique which incorporates acupressure and is supposed to act as an instant face lift. To my great surprise, it did! My face had much less “drooping” and it is now a few days later and it still looks lovely. But the facial itself was not that good and I won’t be going back. Will try someplace else.

I’ve been eating out more often, but still cooking for myself at least once a day. But enjoying having the choice. Also enjoying reacquainting myself with my summer clothes and being able to spend the day out and about without worrying about layers of clothing, shawls, sweaters, etc., in my bag.

I already have a workshop scheduled for Sunday, and so today went into town to print up more workbooks. And then had to purchase a gift for a wedding I am invited to on Thursday. The weather was so pleasant, I decided to give shoe shopping one more shot before giving up on ever finding something which is both comfortable and nice looking. As I got back to the main road, I began hearing a caconophy (don’t even know if that is a word) of sound. As I got closer, it got louder and more discordant with each step. I then saw in front of me wagonloads of enormous blaring speakers, each one for a separate band with dancers and singers all dressed up on the wagon and the musicians walking along in front of them. It looked like a parade, but sounded like a very serious competition for the loudest and worst band in the city. And each band was doing its utmost to be the winner. It was truly earsplitting. I finally got past all of them and found someone to ask who spoke a little English. He explained that this was a religious festival celebration from the local ashram and it was celebrated every year. And then he asked “It is wonderful, no?” . Of course I agreed that it was indeed amazing!

Well, it seemed to be my lucky day. I actually found THREE pair of shoes which will now serve me for a long time. Two for every day (all are thong types which I have gotten used to wearing but had no nice ones)..each costing 10 shekel and quite good quality, and the third, for dress up, and expensive at 30 shekel! I was quite excited…I have terribly problems buying shoes of any type. I tried on over 20 pair, but coming home with three is wonderful for me. I already tried out one on a fairly long walk today and they seem fine.

Spent a lovely 3 hours with two lovely Norwegian girls who studied Reiki with me and arrived home at 6:30, after being out since 10:30 this morning. A full and wonderful day for sure.

Tomorrow I will go down to the Ganga to sit I think, as I haven’t been down there for some time, and in the evening I have someone coming for a Tarot reading.

And that’s about it….

This entry was posted on Thursday, February 12th, 2009 at 9:48 am and is filed under Blessings/Gratitude, Cooking, Daily Life, India, Photos, Reiki, Rishikesh, Weather, Work. You can follow any responses to this entry through the RSS 2.0 feed. You can leave a response, or trackback from your own site.