February 4-6- Panchakarma 7,8,9 and Signs of Warmer Days – And Lovely Indian Meal and Visit with Friends

February 4-6- Panchakarma 7,8,9 and Signs of Warmer Days – And Lovely Indian Meal and Visit with Friends 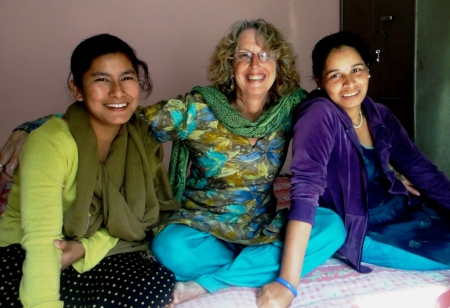 Devi, Laxmi and Me

Now that the weather is warmer, I can go out for breakfast if I am too lazy to cook it in my room (how much lazier can a person get?????). So today, (and the next day and the next day), I sit out on the terrace over the Ganga waiting for my wheat porridge – a nice change from oatmeal – with the sun warming me from behind.  Life is a true blessing each and every moment if we can appreciate the simple pleasures and miracles of daily life.

Just a quick note about the signs of changing weather.  The water I keep in my room for drinking, when at room temperature until now, was actually like ice water taken out of refrigerator and I had to heat it a little to drink it.  Now it is really just “room temperature”.  And my ghee…well, at the height of the cold it was so solid that I actually bent a couple of spoons trying to get it out of the container.  Now it is not only soft, it has started to turn liquid again.  And the best sign of all….I am wearing my sandals with no socks!  Freedom at last!  It also means that I really don’t feel like spending time with the computer during the day, and by the time evening rolls around, I’m tired! So today I am actually sitting outside with the laptop, enjoying the fresh air and getting this done at the same time!!

Friday was massage and Sirhodhara again, and everything being warmer, it was particularly pleasant to lay there with the oil dripping, and actually falling asleep.  And then a nice hot shower , and then back to my room for a day sitting out in the sun.  My needlepoint is really coming along nicely and I was able to sit out until after the sun went down without being chilly.  Yesterday, I had massage and Natri Basti which is the use of warm ghee to work on the eyes.  The little bowl made from the hoummous flour is place over each eye separately and warm ghee is poured into it and then you are requested to open your eye.  It actually feels wonderful!  And hopefully will get rid of whatever it is which is bothering my eyes since I arrived.  Last year it worked.  Following that, I was invited to Laxmi’s house for lunch, along with Devi, and to my surprise Dr. Arora as well.

Her house is looking really lovely and there have been some changes, as in her bedroom.

Observation:  despite now having three rooms, life is still apparently carried on in this one room, just as before.  When all had to eat, a table was brought in and two chairs for me and doctor on one side, and the other people on the bed. This is still the “living room”…

But the curtains she ordered have not been delivered yet – “tomorrow” is the answer and some of you may have read my post explaining the meaning of the Indian work for tomorrow, which is “kal”, which also means yesterday by the way.  Anyway…here is a quote from that post:

“Just a quick insight into India: The word “kal” in Hindi, when literally translated, means both yesterday and tomorrow (and is usually accompanied with hand signals to indicate which- either pointing forward or back over the shoulder). However, the true meaning is really: “not today”…meaning anything which is not today.

Laxmi had promised to prepare “not spicey “ food for me but I didn’t have great expectations…and so I was not disappointed.  But Laxmi’s mother-in-law had prepared a real feast…first the doctor and I were presented with our portions and when I saw what was on the tali plate, I didn[‘t know what to say!  So I turned to Dr. Arora and said “please don’t tell Dr. Arora what I am eating today”….he laughed.  Then he also began eating 4 types of subji (vegetable side dishes), and dahl and rice.  He tasted everything, including the separate plate of hot fried pakoras, and then pointed and said to me “don’t eat this- the cauliflower subji – it is VERY spicey, or this (pointing to the pakoras).”  So I didn’t.  I assumed all along that he steered me away from the pakoras for being spicey as well. Later found out this was not true, but that will come when we get to it.

So I had  lovely “not very panchakarma” meal including kidney bean dahl, rice, potatoe subji, some green vegetable subji and another subji made from the stem of the banana plant(?). All were lovely, but a little spicey for me, but I managed and actually enjoyed myself.  At one point, I picked up a big spoonful (only the doctor and I were given spoons – more on that later as well) of the green vegetable when both Devi and Laxmi yelled out “no!”….in the spoonful, unseen by me, was a WHOLE green chili pepper about to find its way into my mouth!!.  That would have been the end of me for sure.  Everyone had a good laugh, as you can imagine.

For dessert was a kind of compote made from a fruit that no one could tell me the name of, made with mustard seeds, tumeric and jaggery (cane sugar) and very juicy and sweet and delicious.

And then the doctor left – eat and run – and just us girls were left.  And that is when Devi said “have some pakora”, and I replied “no, it is spicy”…and she…”not, not spicy”…and sure enough, they were delicious, and I ate my fill.  Apparently when the doc referred to them, he meant don’t eat them because they are fried and REALLY not good for you.

Due to the language problem, I mostly just sit and observe interactions between people…two friends (Devi/Laxmi),

mother/daughter-in-law, and later mother/daughter/grandmother…as well as one of grandmas friends who was over …and I find it fascinating.  We all went up on the roof and Laxmi decided it was time to clean it up from the mess the builders has left.  There is no way I can describe the Indian way of doing this, but will say that any other westerner watching, would have been as astounded and appalled at the inefficiency with which this job was done.  On the other hand, despite working with primitive equipment (nothing to even gather debris with…all the dust and grit and concrete etc., which was moved into piles, was lifted by hand into buckets!!)….everyone working,,,,the two girls, the mother-in-law in between resting and talking with her friend….and her friend…all were laughing and enjoying the afternoon’s activities!.  When all was done,  back downstairs for the mandatory chai, which I first I almost said no to, but after everything else I had eaten I figured why not…and it was just wonderful!

All in all I had a wonderful day and went home happy and satisfied, and then sat up on Seema’s roof with her for another couple of hours of lovely chatting.  Life is good.

Just a quick note about Indians eating by hand….I really can’t describe it – it would have been great to video it…but you can’t very well sit filming people sitting across from you on the bed eating…not very nice – for the same reason I didn’t video them working up on the roof – it really wouldn’t be nice.  I will do my best to describe something which is learnt from childhood and is a true art.  The rice seems to be the vehicle for moving everything else into your mouth.  So first, with the fingers of the right hand, the rice is kind of kneaded into a sticky mass, and then whatever else you want to go into your mouth at the moment is added to it…soup, or vegetables, whatever, and further kneading is done until you have kneaded yourself a perfect bite size ball of mush which you then simply pop into your mouth…nothing drips, nothing dribbles, very neat and clean. Very efficient…a real science.

Today was a massage and steam bath, quick lunch and home to rest.  It’s been a lovely weekend and a great beginning of a new week.  Kind of looks like rain is headed this way for a day or so, but it is still nice and warm, windows open, sandals, etc.

And that’s a sum up of the last few days…