FIRST IMPRESSIONS AFTER TWO YEARS AWAY

FIRST IMPRESSIONS AFTER TWO YEARS AWAY

Insight about when to fly in to Delhi for best travel options.  Arrived with Turkish Airlines at 4:30 AM…ON A SUNDAY MORNING. Flying out of Israel was the easiest yet since it was Shabbat, and the airport was fairly empty.  Check-in was an all time record at only 10 minutes start to finish!  Also, Delhi airport was almost empty so no long lines to wait on and I was out of the airport, including getting my luggage, in less than half an hour

And then driving at that hour, on a Sunday morning, through Delhi, was child’s play…no traffic, no noise….and this continued for the first 2/3 of the journey.  The first 150 km., all on the new Highway, took just under 2 hours!  The last 100 km, through towns and with morning activity already beginning, even though Sunday, took 3 hours.  But still a very reasonable ride. Most of the way we drove at the unheard of speed of 80 kph on the new road which is fabulous. There were times when the speedometer hit 90 and even 100! 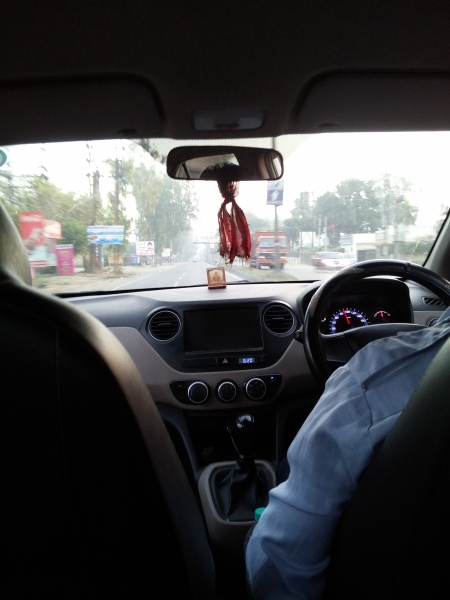 NOTE THE SPEED ON THE SPEEDOMETER

By 7:30 I was already sitting down to a breakfast of Aloo Parantha and Masala at Grand Cheetal rest stop.

Two Road signs along the way:

SAY NO TO PLASTIC BAGS.  PLASTIC IS NOT TRENDY

….and indeed…you can now ad texting while driving to the already existing hazards of India roads.

SEE VIDEO IN LINK BELOW

India itself has stayed the same in many ways, and continues to change and grow as well at amazing speed.  WIFI access for example, which only two years began to find its way into restaurants etc., and was very “iffy”, is now almost everywhere, and WORKS beautifully! The prevalence of Western mode of dress, particularly among younger girls and women, is extensive although in the towns along the way, I saw none of it.  But here, in Rishikesh, where there are lots more Indian tourists, not pilgrims, just tourists, all are dressed in Western clothing.  It has become a very popular “get away” for the younger Delhi crowd, as well as families, and I’ve been told that for most of the year, there is actually more income from Indians these days than from Westerners, who have become unreliable as a main source, and also pay much less money for the same services and accommodations than Indians do.

But mainly these are cosmetic changes…new restaurants and guesthouses everywhere I look (and I’ve been out and about very little these first few days as it is very hot…unseasonably so), fancier cars, clothing shops etc., but the essence, the soul of Indian, remains the same.  It is something which never seems to change and it is what brings me here time and again.  I will be writing more about this as the time goes by.

Enough for this first post….next one will quickly sum up my first few days

With love light and JOY

This entry was posted on Wednesday, September 30th, 2015 at 5:56 pm and is filed under Daily Life, Delhi, Impressions, India, Rishikesh, Sunrise, Videos. You can follow any responses to this entry through the RSS 2.0 feed. You can leave a response, or trackback from your own site.

2 Responses to FIRST IMPRESSIONS AFTER TWO YEARS AWAY